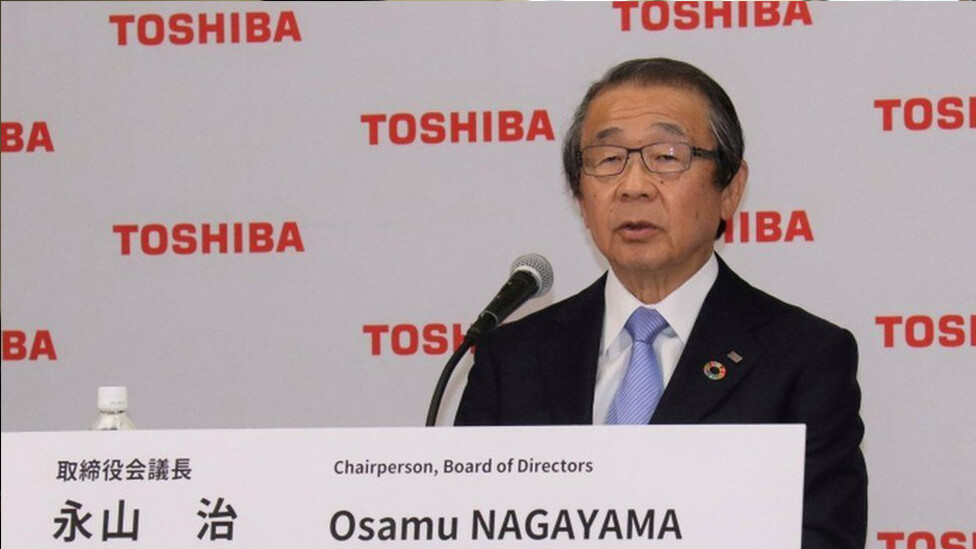 The chairman of scandal-hit Japanese conglomerate Toshiba has been voted out after a shareholder revolt.
Osamu Nagayama’s ousting comes after the company was found to have colluded with the government to suppress the interests of foreign investors.

Some investors see the result as marking a new milestone for corporate governance in Japan.
Supporters of Mr Nagayama say it will set the firm further back, depriving it of leadership at a time of crisis.

One of Toshiba’s largest shareholders, 3D Investment Partners, which had previously called for Mr Nagayama’s resignation, welcomed the result.
“We hope that today’s AGM (annual general meeting) marks the beginning of a new era at Toshiba – one that will be marked by a focus on value creation, transparency to all stakeholders and a renewed commitment to building trust with shareholders,” it said in a statement.

Today’s vote came after activist Toshiba shareholders won a battle earlier this year to secure an investigation into allegations that overseas investors were pressured to vote in line with management board’s nominees.

Mr Nagayama only joined Toshiba’s board in the middle of last year after the pressuring of foreign shareholders allegedly took place.

He is a well-respected executive, who had led the Japanese pharmaceutical firm Chugai and been on the board of Sony. Both the electronics giant and former US ambassador to Japan John Roos had expressed their support for him.

But critics argued he should step down to take responsibility for the board’s resistance to the call for an independent probe.

“[Mr Nagayama] bears the greatest responsibility in nominating candidates and has ultimate responsibility for the conduct of the board,” Toshiba investor Effissimo said in an earlier report.