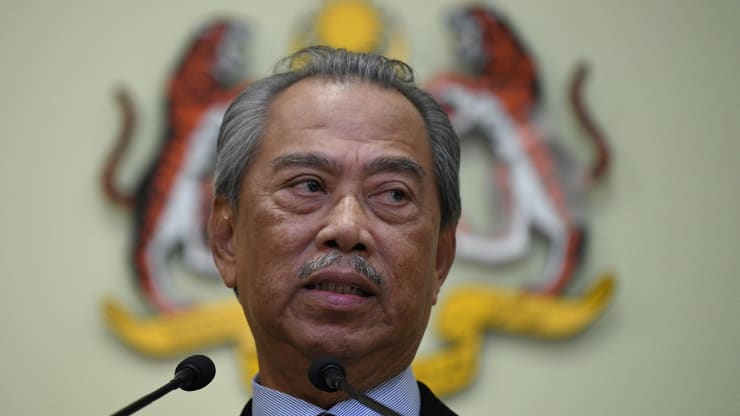 SINGAPORE — Battling a renewed Covid-19 outbreak, Malaysia needs greater fiscal support for its economy, but political jockeying for the prime minister’s position could cause the government’s upcoming spending plan to fail, analysts warned.

The government led by Prime Minister Muhyiddin Yassin will announce its proposed budget for 2021 on Friday. Parliament will then debate on the proposal for several weeks before voting on whether to approve the plan.

“We would be remiss not to highlight that politics also risks derailing the 2021 Budget,” economists from Japanese bank Mizuho said in a Monday report.

“For one, loosely affiliated parliamentary alliances in the current (Muhyiddin) government make it unclear if the budget will be passed at all,” they said

A recent spike in new cases of the coronavirus has led authorities to reinstate lockdown measures in certain areas — a move that some analysts said could delay the country’s economic recovery. Malaysia previously imposed a nationwide lockdown in March, but started to ease those restrictions in May.

The Malaysian economy is expected to shrink by 6% this year — which would be one of the worst economic performances in Asia, according to a forecast by the International Monetary Fund.

The political tussle in the past few weeks among elected members of parliament — including those supposedly aligned with the prime minister — has threatened to unseat Muhyiddin. He came to power in March this year after the collapse of a ruling coalition that won the 2018 general elections.

Muhyiddin was part of that winning coalition, but pulled his party out of the alliance — causing its collapse. Instead, he tied up with parties who lost the 2018 elections and became the prime minister.

Parliamentary support for him was never tested, but analysts said he likely only has a razor-thin majority.

Losing the budget vote could result in Muhyiddin stepping down and the dissolution of parliament, Citi economists said in a report last week.

“Even if the Budget is approved, the PM’s position will remain highly vulnerable, with political jockeying likely to continue. As such, snap elections seem increasingly likely, but the timing would very much be dependent on the evolving public health situation and public opinion,” they wrote.

That’s likely why he sought to avoid a vote on the budget, which is seen as a proxy to a no-confidence vote against his leadership, said Oh Ei Sun, senior fellow at think tank Singapore Institute for International Affairs. The Malaysian parliament has never voted on a no-confidence motion.

Muhyiddin had wanted to declare a state of emergency, but Malaysia’s king rejected his request. Oh told CNBC’s “Squawk Box Asia” last week that if the king had approved the request, Muhyiddin could have bypassed parliament to enact the budget.

“I think the most exigent task for Mr. Muhyiddin nowadays is indeed to pass the budget so that, for example, salaries could be paid, money could still be allocated to fight the coronavirus and so on,” he said.

“When it does come to a vote … he might or might not have a majority. Even if he has a majority, it’ll be extremely thin. So I think he wanted to, in a sense, bypass parliament, to suspend parliament so that by decree, he could pass such (a) budget and continue to rule the country.”

Muhyiddin has urged all members of parliament to support the budget for the sake of the country and its people, local media reported.

While it’s not clear whether Muhyiddin has enough support to pass the budget in parliament, it’s also uncertain if Anwar Ibrahim — an opposition leader who has challenged Muhyiddin — has sufficient support to become prime minister.

Anwar claimed in September that he had a “formidable” majority to oust Muhyiddin, and local media reports suggested that some of his support came from within the ruling coalition. But political parties within the coalition have pledged allegiance to Muhyiddin for now, raising the question of whether Anwar can mount a successful challenge.

What may be in the budget

In addition to politics, the Muhyiddin government faces a tough challenge in supporting the economy’s recovery and remaining financially prudent at the same time, economists said.

The government has had to increase its deficit this year due to the pandemic. Malaysian Finance Minister Tengku Zafrul Aziz told CNBC in October that the fiscal deficit is projected to be 5.8% to 6% of GDP in 2020. That’s higher than the 3.4% of GDP last year.

Next year’s budget deficit will likely be lower as the economy is expected to bounce back, the finance minister said. IMF has projected Malaysia to grow by 7.8% in 2021.

Citi economists said next year’s deficit would narrow to 5.3% of GDP — that will allow Malaysia to meet its target of reducing the budget shortfall to 4% of GDP in three years.

Here are what the economists said could be in the budget for 2021:

“Despite recent increase in political uncertainty, we expect the Budget to be passed in Parliament, but perhaps with concessions to obtain broader support across the political spectrum,” Citi economists said.