Firms urged to get ready for new EU relationship 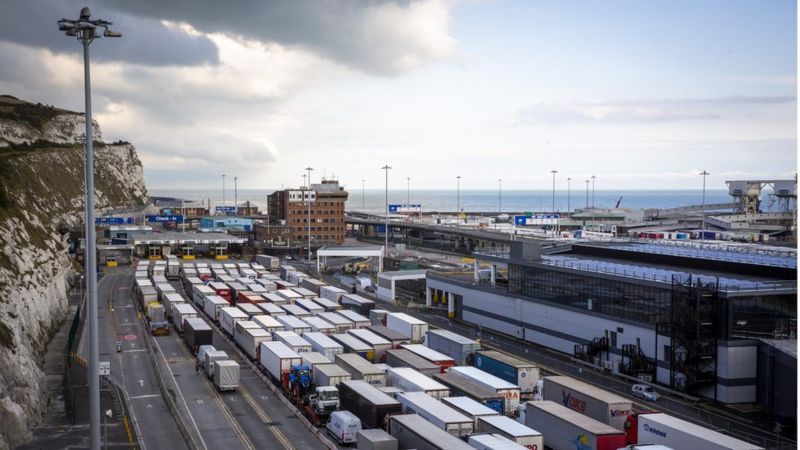 Companies need to step up preparations so they are not “caught out” by new post-Brexit trade rules, the government has said.

A public information campaign titled “Time is running out” will urge firms to focus on the 1 January deadline.

However, it is not yet clear exactly what the trading relationship between the UK and the EU will be.

A group representing British businesses said it was no surprise companies were struggling to prepare.

“Many firms will be tired of posturing, cliff edges and deadlines, while others are still grappling with fundamental challenges as a result of the pandemic,” said Adam Marshall, director of the British Chambers of Commerce (BCC).

“More businesses will undoubtedly step up preparations for change over the coming weeks, but many are still facing unanswered Brexit questions that have a big impact on their day-to-day operations.”

In just over eight weeks’ time, the UK will be outside the EU single market and customs union.

Due to this, firms will need to ensure they adhere to new customs procedures, visa, work permits, and immigration rules.

The UK’s 8,000 hauliers that trade with the EU will need their customers, numbering about 200,000 firms, to provide all the right information before their trucks can enter the EU.

“Whether there’s a deal or no deal, many of the things our industry need to do are the same,” such as customs declarations and security checks, she said.

A concern is drivers not having all the right paperwork to cross the channel, leading to delays and queuing, she added.

If Britain were to leave the EU at the end of the year without a specific agreement on its trading relationship, firms would be faced with new tariffs and quotas on top of the additional red tape, raising the costs of imports and exports.

“Make no mistake, there are changes coming in just 75 days and time is running out for businesses to act,” said cabinet office minister Michael Gove.

“It is on all of us to put in the work now so that we can embrace the new opportunities available to an independent trading nation with control of its own borders, territorial waters and laws.”

Downing Street said on Friday that official negotiations over a trade deal were “over”, without reaching a deal and that the UK should prepare to leave the EU on what it dubbed Australia-style terms.

However, Mr Gove told the BBC on Sunday that the door was still “ajar” to further talks, if the EU was ready to significantly change its position.

The government said that in light of the impact of coronavirus on businesses’ ability to prepare, new border controls were being introduced in three stages up until 1 July 2021.

However, there are definite actions firms need to take now, including:

Businesses are able to get a personalised summary of the actions they need to take at gov.uk/transition, the government said.

HM Revenue and Customs is writing to 200,000 firms which trade with the EU, to set out the new customs and tax rules coming into place and how to deal with them.