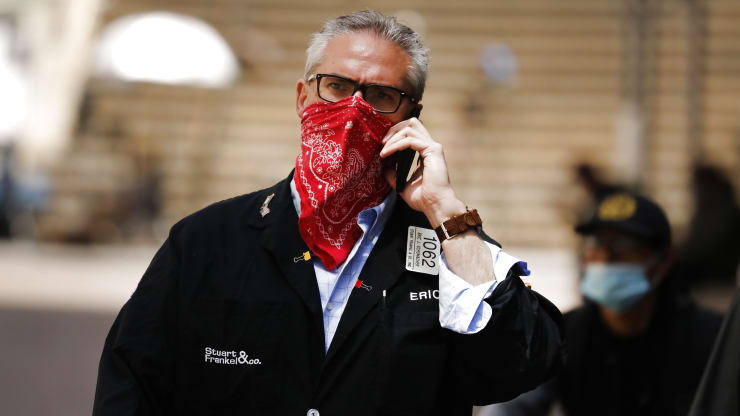 U.S. stock futures were lower on Wednesday night as traders continued to weigh the prospects for a coronavirus aid deal being reached before next month’s election.

Treasury Secretary Steven Mnuchin said on Wednesday that reaching a coronavirus stimulus deal before the election would be difficult as Democrats and Republicans remain far apart on certain issues. His comments came after House Speaker Nancy Pelosi, D-Calif., said earlier this week that a recently proposed package by the administration “falls significantly short” of what is needed.

The uncertainty surrounding the aid talks led to the market’s second straight daily decline. The Dow slid more than 160 points, or 0.6%. The S&P 500 and Nasdaq Composite pulled back by 0.7% and 0.8%, respectively. Wednesday marked the first time since September that the major indexes posted consecutive daily losses.

“Market volatility is set to continue in the weeks ahead as investors brace for a host of uncertainties—the timing of vaccine availability (after a setback for Johnson & Johnson), the size and timing of additional US fiscal stimulus, and the election outcome,” wrote Mark Haefele, chief investment officer of global wealth management at UBS. “The uneven recovery in the US economy also adds to investor concerns as the results season kicked off this week.”

“This is the second earnings season in the wake of the Covid-19 pandemic … and arguably this will be one of the most important earnings seasons ever,” wrote Jeff Kilburg, CEO at KKM Financial. “As investors globally try to gauge the actual damage inflicted upon the economy by Covid-19, expectations are simply that earnings will not be as bad as they were in Q2.”

“In the event we have an overall positive tone transmitted, I believe the path for U.S. equites is higher,” Kilburg added.

On the data front, weekly jobless claims numbers are set for release Thursday morning along with the latest data on import and export prices.