Brexit trade talks: Deal can and must be made, says CBI boss 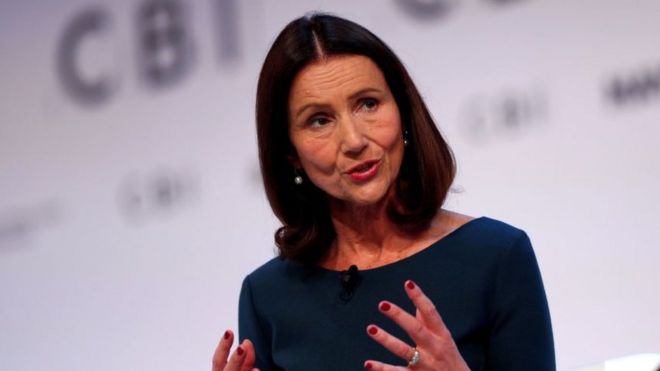 A post-Brexit trade deal “can and must be made”, the organisation representing British businesses has said ahead of further UK-EU trade talks on Monday.

Dame Carolyn Fairbairn, the boss of the Confederation of British Industry, said it was the time for “the spirit of compromise to shine through”.

The Brexit transition period, in which the UK has kept to EU trading rules, ends on 31 December.

The UK and EU are yet to agree a deal that will govern their future trade.

Prime Minister Boris Johnson has said a trade agreement with the EU must be done by 15 October if it is going to be ready for the start of 2021.

But despite this, talks have run into problems. There are still key points of disagreement – including, for example, on fishing.

The next official round of talks – the ninth since March – begins on 28 September.

The CBI carried out a survey of 648 companies which found only 4% said they would prefer no deal to be agreed on trade.

And half of firms said the impact of dealing with the coronavirus had negatively affected their preparations for next year, when the transition period ends.

“Next week Brexit talks enter the 11th hour,” said Dame Carolyn. “Now must be the time for political leadership and the spirit of compromise to shine through on both sides. A deal can and must be made.

“Businesses face a hat-trick of unprecedented challenges – rebuilding from the first wave of Covid-19, dealing with the resurgence of the virus and preparing for significant changes to the UK’s trading relationship with the EU.”

She added: “A good deal will provide the strongest possible foundation as countries build back from the pandemic.

“It would keep UK firms competitive by minimising red tape and extra costs, freeing much-needed time and resource to overcome the difficult times ahead.”

According to BBC Europe editor Katya Adler, one EU diplomat said the two sides were “90% there” on agreeing technical issues.

The diplomat said the “remaining 10% is political” and “if that can’t be solved, then the 90% is irrelevant”.

Any trade agreement will aim to eliminate tariffs and reduce other trade barriers. It will also aim to cover both goods and services.

If negotiators fail to reach a deal, the UK faces the prospect of trading with the EU under the basic rules set by the World Trade Organization (WTO).

If the UK has to trade under WTO rules, tariffs will be applied to most goods which UK businesses send to the EU.

This would make UK goods more expensive and harder to sell in Europe. The UK could also do this to EU goods, if it chooses to.