What Trump wants from global trade 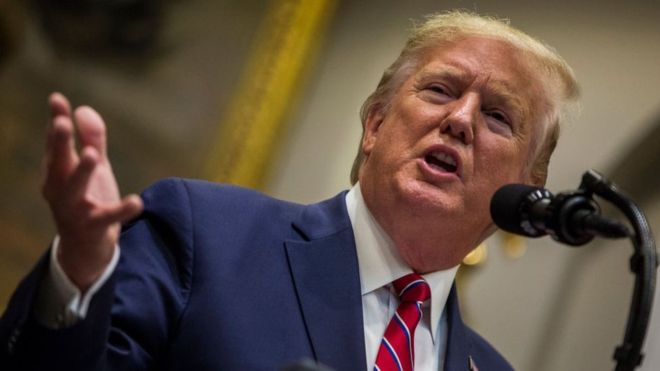 President Donald Trump’s approach to international trade is driven to a large extent by his belief that the United States is being unfairly treated by other countries.

His main supporting evidence is the trade deficit – the US buys more than it sells internationally.

He has referred to the deficit as losing money. In one tweet he wrote about losing $500bn (£388bn) a year as a result of crazy trade with China. No more, he promised.

One of his central economic objectives has been to reduce it. In November 2017, his first year in office, he referred to the total deficit with all trade partners of almost $800bn a year as unacceptable. He said: “We are going to start whittling that down, and as fast as possible”.

But it hasn’t come down. The figure that President Trump referred to was for trade in goods alone. It has increased in both of the full years since he took office.

It was $750bn in the final year under President Barack Obama, $887bn in 2018, and the increase has continued. We have figures for the first nine months of this year, showing the deficit was larger, though only slightly, than in the same period of 2018.

Mr Trump focuses on bilateral deficits, often suggesting they are evidence of the unfair actions of the other country concerned.

The deficit with China is by far the largest. It rose in Mr Trump’s first two years, but for the first nine months of 2019 it is lower. Both imports and exports have fallen, imports by more.

That is hardly surprising as the two countries have applied increased tariffs to large swathes of one another’s goods.

So a success for President Trump? Only if you think bilateral trade balances really matter. And most economists think they don’t.

Getting one bilateral deficit down does not guarantee you reduce the overall deficit. The deficit with China may be down, but others have increased – Vietnam, Mexico and Taiwan for example.

Part of the underlying story is the fact that the trade balance with the rest of the world is mainly driven not by barriers that countries put in the way of one another’s goods.

Instead, it’s about whether countries buy more goods and services than they produce. Prof Greg Mankiw of Harvard University (who used to be a supporter of the Republican Party) puts it like this: “If you really want to reduce a trade deficit, the way to do it is to bring down spending relative to production, not to demonise trading partners around the world.”

President Trump has, if anything, done just the opposite. His tax cuts have given a boost to the US economy, though that may now be fading. But it’s not really surprising that the trade deficit should rise as Americans – families and businesses – have had more to spend, and some of that money goes on imported goods.

There is an idea in economics known as the “twin deficits hypothesis”, that there is a link between a government budget deficit and a trade deficit – or strictly speaking, a current account deficit that includes some financial transactions in addition to trade in goods and services.

It is by no means a settled debate, but the idea that tax cuts can in some circumstances lead to a larger trade deficit is entirely credible.

So there is a coherent story here that President Trump has taken steps – tax cuts – that make it harder to achieve something else he wants – a reduction in the trade deficit.

That’s not to say that President Trump isn’t on to something, in the sense that his views on trade may reflect real economic damage in some communities. The Nobel Prize winner Esther Duflo says there is among economists an “instinctive view on trade, that it should be good for everyone”. But it’s not true she says.

Although trade boosts growth overall, it does produce concentrated pockets of job losses, she says. That’s not a new view, and it doesn’t mean you can turn the clock back or reverse the losses by putting up new trade barriers.