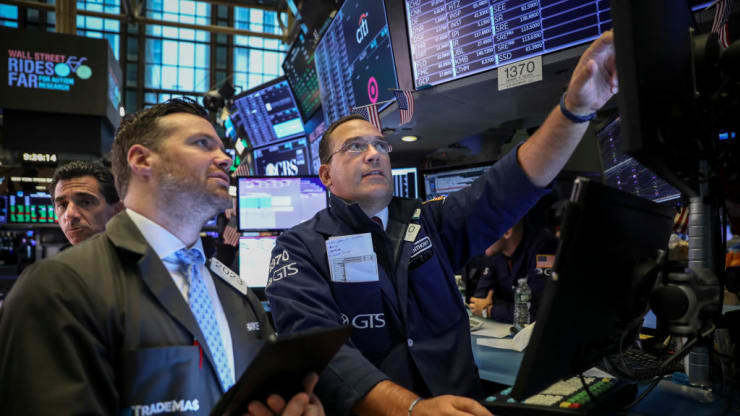 As November unfolds, stocks should continue to make gains in one of the best months of the year for the market, and it’s very likely the Dow will soon join other indexes in setting new highs.

The S&P 500 and Nasdaq both traded in record territory in the past trading week, boosted by some better economic news, a better-than-expected earnings season, and hopes that trade talks will soon lead to a first-phase deal between the U.S. and China. On Friday, China said it reached a consensus with the U.S. in principle after a phone call among high-level negotiators.

Analysts say stocks could follow the seasonal trends higher, barring problems in trade talks. The market is starting the best three months of the year historically, and it has a few catalysts in the week ahead. There are a number of economic reports, the most important of which will be the ISM services PMI on Tuesday.

Top months ahead for stocks

November is the third-best month for the S&P 500, which has been higher two-thirds of the time since World War II with an average 1.3% gain, according to CFRA. As good as November has been, December is even better, and as the No. 1 month, it is up 76% of the time with an average 1.6% gain. November, however, is the month that has seen the most new highs for the S&P, on a percentage basis, according to CFRA.

“Investors likely remain too skeptical on the impact of Brexit, the U.S.-China trade talks and the impeachment hearings. They’re too skeptical that the market can advance,” said Sam Stovall, chief investment strategist at CFRA. Many strategists say the efforts by Democrats to impeach Trump is not hurting stock prices currently but it could if there are any developments that would put his re-election in doubt.

“I think November and December are pretty much going to buck the emotional trend right now. The market is telling us it wants to go higher,” Stovall said.

“This will be the 31st consecutive quarter in which actuals exceed estimates, but as much as earnings are coming in better for the quarter, they’re going down in terms of Q4 and 2020. That’s not good,” said Stovall. But he said stocks could be lifted by the end of the trade war, the impact of lowered interest rates and a possible tax cut from the White House.

“I think because the market is doing so well, it might be telling us we’re underestimating forward growth. Prices lead fundamentals,” he said.

The S&P and Nasdaq soared into record territory Friday after the October jobs report showed nonfarm payrolls grew by 128,000, much greater than expected. The number was weaker due to the strike against General Motors but not as weak as feared.

The Fed also added to positive sentiment with a rate cut on Wednesday, but the central bank went out of its way to signal a pause in policy.

“The rally is definitely broadening out. The measured move is 3,200 on the S&P 500 by year-end. In the last two sessions, we retested and spent some time above the 3,025 area. Today’s move showed some needed power, after a jobs report that was Goldilocks: It had something for everyone, not too strong to have the Fed as a headwind but strong enough to keep recession fears away,” said Scott Redler, partner with T3Live.com. “Today’s move lends some power to the bulls.”

Redler said Apple’s performance this week was a big boost to sentiment. It ended the week up 3.7%, at a new all-time high, after strong earnings. “Traders love when Apple leads the way,” he said.

Historically, industrials have had the best gains on average in November, going back to 1995. Industrial stocks have been up an average 2.9%, followed by materials, up 2.7%, consumer discretionary, up 2.6% and then technology, up 2.4%, according to CFRA data.

“The cliche thing is everyone is focused on the breakout. I think the key technical event that’s been developing for weeks, it’s really been this rotation toward cyclicals,” said Robert Sluymer, technical strategist at Fundstrat.

He said he expects the Dow to break to new highs soon. “We think the market is strong through year end and well into 2020. We continue to think the market cycle low developed in late 2018. This is the next leg up in the bull market,” he said.