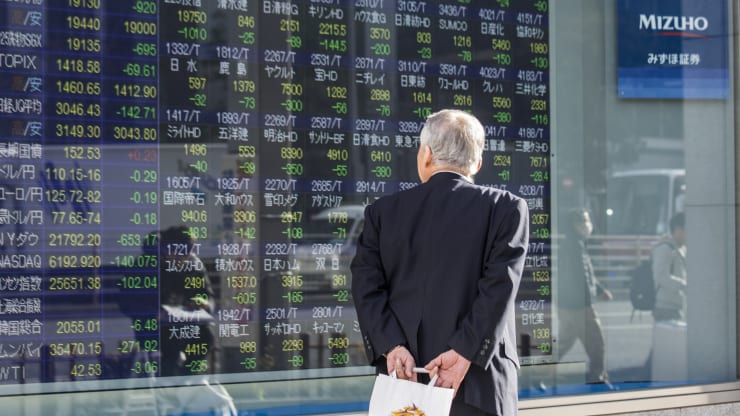 The Nikkei 225 in Japan rose 1.03% while the Topix index added 0.82%. South Korea’s Kospi index was up 1.03% as Samsung shares gained 1.05%. The tech giant announced third-quarter guidance, saying its operating profit for the three months that ended in September is expected to more than halve from a year ago, but it is set to beat analysts’ expectations.

The session in Asia follows a muted performance on Wall Street overnight where stocks dipped slightly.

“Investors are very focused on the US-China trade talks and ongoing Brexit discussions in what is generally a quiet week for data,” Rahul Khare from ANZ Research said in a morning note. “The market continues to debate the degree of easing required from the Fed following the recent fall in unemployment but weakening activity indicators.”

High-level trade talks between the world’s two largest economies are due to start on Thursday, but reports said Chinese officials appear to be growing hesitant to pursue a broad trade deal with the United States. Deputy trade negotiators from both sides also began a new round of talks on Monday aimed at ending the prolonged trade war, where Washington and Beijing have imposed tariffs on billions of dollars worth of each other’s imports.

But, new developments this week may potentially complicate the negotiations: The U.S. Commerce Department on Monday added 28 Chinese firms and public security bureaus to the so-called Entity List, a blacklist restricting their ability to do business with American companies. Many of those names added include Chinese tech companies such as SenseTime Group, video surveillance firms Hangzhou Hikvision and Shenzhen-listed Zhejiang Dahua Technology, and IFLYTEK.

The growing dimensions of the U.S.-China disputes, which include security issues — such as Huawei and 5G technology — and trade, “set the stage for a prolonged conflict,” Vishnu Varathan, head of economics and strategy at Mizuho Bank, wrote in a morning note. “The means (and presumable) motives for acrimony in US-China relations are outpacing the options and ability to find solutions/compromises to arrive at a deal.”

Analysts at J.P. Morgan said in a note they expect four possible scenarios could emerge from the trade negotiations.

First, an “ice-breaking meeting that will lead to a major deal” in the coming months; second, a “mini-deal” focusing on China’s purchase of U.S. products and some structural reforms while new tariffs get postponed indefinitely; third, a no-deal status quo where new tariffs come into play, but negotiations continue; and, finally, a break-up scenario, where there’s no deal and no further dialogue between the U.S. and China.

J.P. Morgan analysts said they are expecting a no-deal status quo while “market investors also have high hopes for a mini-deal.”

American tariffs on $250 billion worth of Chinese goods are scheduled to rise to 30% on Oct. 15.

In the currency market, the dollar index, which measures the U.S. dollar against a basket of its peers, traded at 98.963, declining from levels near 99.600 in the previous week.

The Japanese yen, which is seen as a safe-haven currency during times of market volatility, traded at 107.35 versus the dollar, strengthening from levels above 107.50 early last week. Meanwhile, the Australian dollar changed hands at $0.6746, climbing from an earlier low of $0.6726.