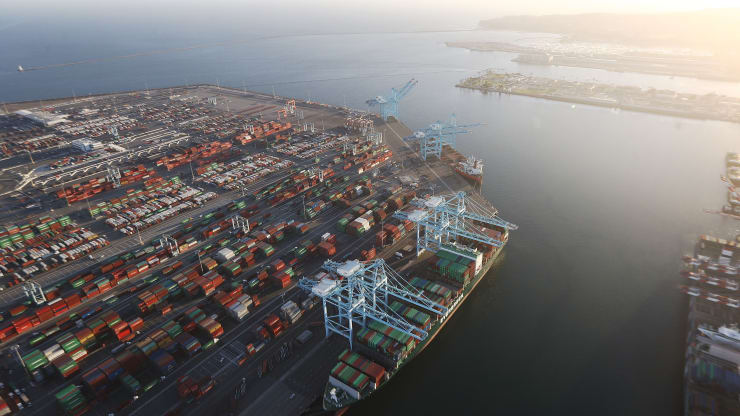 BEIJING — China is moving slowly in the implementation of retaliatory tariffs as trade tensions with the U.S. escalate.

The Chinese government pushed ahead Sunday with increased duties of between 5% and 10% on a variety of major American goods exported to China, including soybeans and crude oil.

However, the proportion of tariffs that kicked in on Sunday only account for about one third of the more than 5,000 product lines listed in the latest announcement. The majority of the duties will take effect Dec. 15, and China’s plans to reinstate tariffs on U.S. autos and auto parts will also not take place until that time.

A report by Panjiva, a supply chain data company that’s part of S&P Global Market Intelligence, pointed out that the products in the Sept. 1 group may have been chosen since those items saw some recovery in shipments rather than further decline. The Aug. 27 analysis pointed out that U.S. exports in the Sept. 1 group fell by 15.2% in the second quarter from a year ago, versus a drop of 20.4% for the Dec. 15 group.

The increases are part of the Ministry of Finance’s Aug. 23 announcement for retaliatory tariffs on $75 billion worth of U.S. goods. A portion of President Donald Trump’s latest tariff increases also took effect Sunday.

Essentially, all $550 billion worth of Chinese exports to the U.S. are set to be subject to duties when another round is implemented in December.

Beijing has sought to boost domestic morale amid the added pressure of tariffs to an economy already facing a growth slowdown. The world’s second-largest economy is also trying to shift away from relying on manufacturing and exports for growth, to consumption.

“The big stick of tariffs can’t hold back China‘s development,” the Chinese Communist Party newspaper People’s Daily said in the headline of a Sunday article, according to a CNBC translation of the Chinese text.

Analyst reports and anecdotes also indicate that Chinese companies are finding ways to adapt to the tariffs and survive in the long term.

However, the Chinese side has called for the cancellation of all additional tariffs as part of a trade agreement.

“Under the current situation, we think the problem that should be discussed is the cancellation of tariffs on $550 billion worth of Chinese exports, to prevent further escalation of the trade war,” spokesman for the Ministry of Commerce, Gao Feng, said during a press conference Thursday, according to a CNBC translation of his Mandarin-language remarks. “At this time, the Chinese side is under serious negotiations on this topic with the U.S. side.”

Here is a selection of some of the U.S. goods that China raised tariffs on this past Sunday, some of which have appeared on previous lists for higher duties:

Subject to a 10% tariff increase:

Subject to a 5% tariff increase:

The retaliatory tariffs in the trade war of the past year has hit American companies as well.

Over the weekend, the U.S.-China Business Council said in its annual member survey that nearly half of the respondents reported lost sales, primarily due to the implementation of tariffs. The survey also found that members were losing market share to foreign competitors.

“Chinese customers are concerned about supply chain links that depend on American companies, which they increasingly view as unreliable business partners as a result of the volatility of the bilateral commercial relationship,” the council’s report said. The portion of respondents citing these Chinese concerns as a reason for lost sales increased seven-fold between 2018 and 2019 to 37%, the survey found.

U.S. exports to China contribute to more than 1.1 million American jobs, according to a separate report from the council.