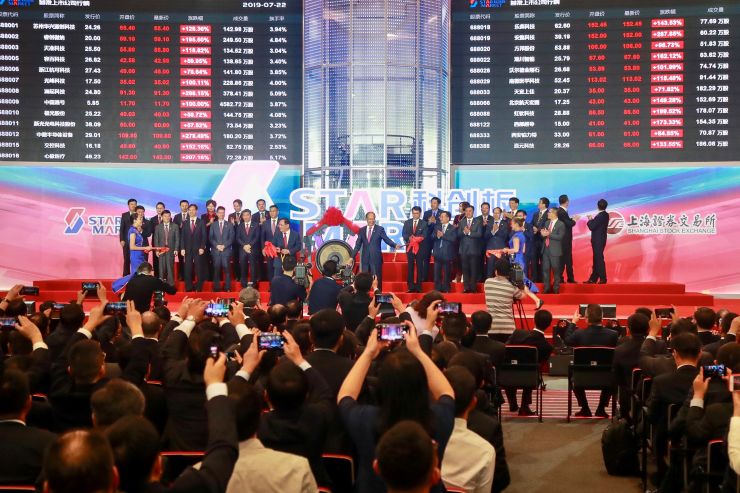 The first tranche of companies on China’s new Nasdaq-style tech board started trading on Monday, with all the stocks seeing gains on their public debut.

Still, some are cautioning against jumping quickly into the action.

“I think this market, it needs to … basically take a little bit of patience to develop,” Eugene Qian, president of UBS Securities, told CNBC’s “Squawk Box” on Monday.

“For anything new in China, there is a tendency for retail-oriented markets like China to overly speculate,” Qian said, adding that this would contribute to a “short-term bubble” that may not be sustainable.

The new technology board — the Science and Technology Innovation Board, or “STAR Market,” which is operated by the Shanghai Stock Exchange — comes as China attempts to address investor concerns about market volatility and the lack of governance.

It’s easier for firms to go public in the new STAR Market tech board, compared to listing on the Shanghai A-share market, as companies need to go through a registration instead of waiting for regulatory approval which could take longer.

“I think a lot of people are going to really be behind this,” Gareth Nicholson, head of fixed income at Bank of Singapore, told CNBC on Monday. “This is gonna be pretty wild.”

Prior to their public debut, initial public offerings on the STAR Market saw an average over-subscription of about 1,700 times among retail investors, Reuters reported. In the first five days of a company’s listing, no daily price limits will be placed. But after that period, a stock will be allowed to trade within a 20% range.

In comparison, listings elsewhere in China are subjected to a gain cap of 44% on their debut and limited to a 10% gain or loss thereafter.

“You need to focus on the sector and the company itself, and make sure that they have decent or stable earnings outlook,” Zhu told CNBC’s “Street Signs” on Monday.

With the new stock board primarily aimed at domestic investors, opportunities for foreign participation will be minimal for now.

UBS Securities’ Qian said foreign investors are likely to watch “with a lot of interest” but will likely “wait a little bit out.”

Many of the stocks listed on the new tech board are similar to those on the Chinext in Shenzhen, which is already included by MSCI in its indexes, Qian said.

“I think there will be opportunities for long-term, value-driven … international investors later on,” he said.

Looking ahead, the Shanghai Stock Exchange said an index tracking the STAR Market will be launched on the 11th trading day following the debut of the 30th company on the board.