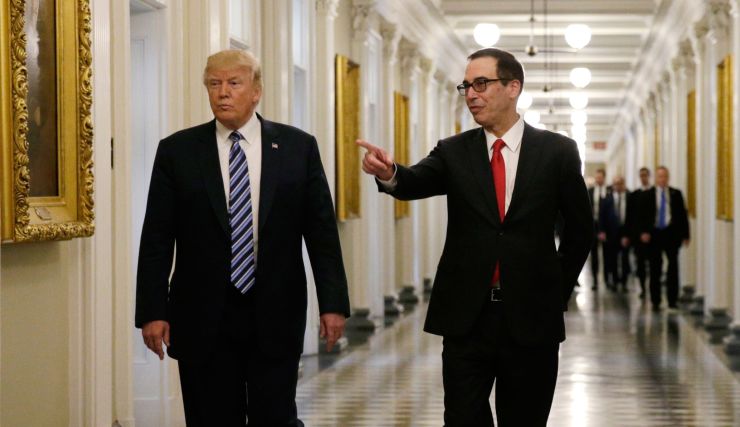 U.S. President Donald Trump will make a decision about whether to slap China with more tariffs after meeting with his Chinese counterpart later this month in Japan.

That’s according to U.S. Treasury Secretary Steven Mnuchin, who told CNBC on Sunday that the American leader will be trying to determine if Chinese President Xi Jinping is willing to head “in the right direction” on a deal to reshape the trade and commercial relationships between the world’s top two economies.

“We’re going to need to see action, and President Trump is going to need to make sure he’s clear that we’re moving in the right direction to a deal,” Mnuchin told CNBC’s Nancy Hungerford. “The president will make a decision after the meeting.”

Trump has previously indicated he expects to plan his next trade war moves after that G-20 meeting.

The two presidents last met in December 2018 in Buenos Aires — already several months into their escalating trade war. At that time, Xi and Trump agreed to suspend planned increases in tariffs while both sides redoubled negotiating efforts. The subsequent few months saw no further escalations amid repeated rounds of talks in both Washington and Beijing, but that pause ended in May when Trump unexpectedly said on Twitter that his administration would be levying new taxes on $200 billion worth of Chinese goods — and he threatened even more to come.

American officials have repeatedly claimed that action was in response to China attempting to renegotiate parts of a deal it had previously agreed to — which Beijing has denied — and the prospect of additional tariffs on that $325 billion worth of Chinese products has hung over the bilateral relationship for the last month.

“We made enormous progress, I think we had a deal that was almost 90% done. China wanted to go backwards on certain things,” Mnuchin said. “We’ve stopped negotiating.”

Where the countries go from here, according to the Treasury secretary, is up to Trump to decide when he and Xi meet in Osaka, Japan at the end of June.

“In the case of Buenos Aires, we came out of that, we had direction from the two presidents, (Trump) put the increases on hold. The president will make a decision after the meeting,” Mnuchin said.

“I believe if China is willing to move forward on the terms that we were discussing, we’ll have an agreement. If they’re not, we will proceed with tariffs,” he added.

Mnuchin weighed in on several of the thorniest subjects thought to be separating the American and Chinese sides from a deal.

For one, he said that the issue of removing China’s so-called non-tariff barriers to foreign companies succeeding within its borders remains central to the U.S. position on the talks.

“In negotiating our agreement, one of the big parts of the agreement has always been about non-tariff barriers, is about forced technology transfer. These are very important issues to us, and critical to any agreement,” Mnuchin said. “These are issues where we’ve made a lot of progress, and any agreement we have, we’ll need to be certain that that’s included.”

American officials and businesses have long argued that China’s official and unofficial rules put non-Chinese firms at a disadvantage in the country. One of the most frequently cited examples is a “forced tech transfer” regime — in which companies are coerced into sharing their advanced technology and know-how with Chinese organizations in exchange for market access.

Trump has also suggested that he may want his negotiating teams to pick up the issue of China’s currency, but Mnuchin on Sunday dismissed the notion that Beijing is actively keeping the yuan low in an effort to win a trade advantage over the likes of the U.S.

Instead, he said, any weakness now seen in the Chinese currency is the result of downward economic pressures — in part due to Trump’s tariffs on the country.

“I do think their currency has been under pressure,” the Treasury secretary said. “There’s no question that, as we put on tariffs, people will move their manufacturing outside of China, into other areas, and that’s going to have a very negative impact on their economy. And I think you see that reflected in the currency.”

Another topic that has raised tensions between Beijing and Washington is Chinese telecommunications giant Huawei. The U.S. government has cracked down on the tech firm, effectively blacklisting it from doing business with American businesses, on the basis of claims it is a security risk. The rationale, according to the Trump administration is that the firm’s involvement in sensitive networking technology could potentially be leveraged by Beijing for spying or other malicious actions. Both China and the company have denied such a risk exists.

Mnuchin emphasized that the Huawei blacklisting is solely a national security issue, and isn’t a non-tariff front of the trade war — even though Trump has suggested that the telecom company could get wrapped into a wider deal.

“They’re separate from trade: Both we and China have acknowledged that in our discussions,” he said. “Now, of course, President Trump, when he has the meeting, to the extent he gets certain comfort on Huawei or other issues, obviously we can talk about national security issues, but these are separate issues, they’re not being linked to trade.”

He emphasized the U.S. claim — central to recruiting allies in its effort to control the spread of Huawei tech — that Trump’s prior comments do not reveal an effort to gain trade leverage over Beijing: “I think what the president is saying is, if we move forward on trade, that perhaps he’ll be willing to do certain things on Huawei if he gets comfort from China on that, and certain guarantees.”

The American official told CNBC he had recently met with Yi Gang, the governor of China’s central bank, to discuss preparations for the upcoming meeting between the two presidents.

Mnuchin declined to go into details of that interaction, but said he and Yi “had a private conversation and it was very candid and constructive” on the subject of Trump and Xi meeting.

The Treasury chief said he did not foresee any further trade talks between Washington and Beijing diplomats before the presidents meet, and, for his part, Mnuchin declined to project what he expected to happen in Osaka.

“What I would say is we look forward to them meeting, they had a very productive discussion in Buenos Aires — that’s what led to these rounds of negotiation,” he said of Trump and Xi. “I know they have a very close relationship, and if there’s a desire on China’s part to reach a real agreement with us, we will negotiate in good faith.”