China would see ‘blue skies ahead’ if it accepts all US demands, Fed’s Bullard says 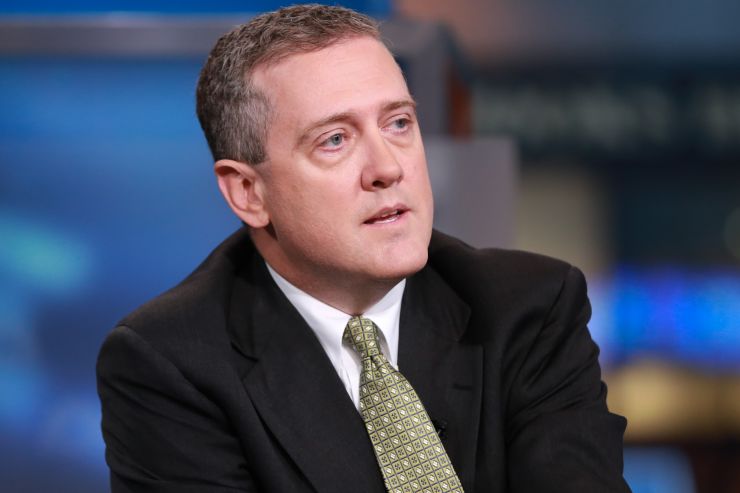 “My base case continues to be that we’ll get an agreement on trade,” Bullard, a voting member on the central bank’s policymaking Federal Open Market Committee this year, said Wednesday in an address at the Foreign Correspondents’ Club in Hong Kong.

Bullard also said that China should accept U.S. demands in the trade talks in order to attract more foreign capital, saying the country would stand to reap enormous benefits.

“They will establish credibility on trade inside China and will reassure foreign investors that they can invest in China and be treated appropriately,” he said in response to questions from the audience.

“And really good things would probably happen for the Chinese economy going forward,” he said.

He added that on a macroeconomic level, China should agree to everything that’s being asked of it by the U.S. “If that occurs I would see blue skies ahead for the Chinese economy,” he stated.

He cautioned that there is a risk of tariffs lingering, which could eventually be something the Fed would need to address.

“I would say If we’re going to see major trade barriers stay in place, they would have to at least be in place for six months before you’d start really worrying about it from a monetary policy perspective,” he said.

“It’s natural in a negotiating framework that you would see a lot of maneuvering right before an agreement is reached and I’m hopeful that that’s what we’re observing right now,” he added.

“But if it did deteriorate into permanent trade barriers that would be something that the committee would have to consider and adjust to,” he said, referring to the FOMC. “But that would be down the road if that occurred.”

The inability of the United States and China to conclude their trade conflict — now more than a year old — has stoked fresh worries about the global economy. President Donald Trump earlier this month increased tariffs from 10% to 25% on $200 billion worth of Chinese goods, with Beijing retaliating. Trump has threatened further action, which Morgan Stanley said could cause a global recession.

‘Ramping up its nationalism’

Chinese authorities have been stimulating their economy through steps such as increasing lending to the private sector to combat the negative effects on growth from the trade war. China’s economy expanded 6.4% in the first quarter, a better-than-expected result. Chinese GDP (gross domestic product) grew 6.6% in 2018, the worst result since 1990.

Whatever the perceived merits of China acceding to U.S. demands, authorities are seen as unlikely to swallow them in full for nationalistic reasons and appear rather to be digging in their heels.

For example, China’s Tencent Video delayed the broadcast of the “Game of Thrones” finale, according to an official message published by the online streaming site on Monday, prompting uproar among fans of the popular American TV series in the country, spurring speculation that the delay was due to political tensions.

“It shows you that China is ramping up its nationalism as it tries to think through how to deal with this U.S.-China back and forth right now,” Curtis Chin, an Asia fellow at the Milken Institute think tank and a former U.S. ambassador to the Asian Development Bank, said Tuesday on CNBC’s “Squawk Box.”

Meanwhile, the U.S. economy expanded 3.2% in the first quarter of this year, beating expectations and recording the best start to a year since 2015. The closely-watched nonfarm payrolls came in at 263,000 new hires in April, while the unemployment rate fell to 3.6% in the same month, the lowest figure since December 1969.

The Fed is currently taking what officials call a “patient” approach to monetary policy after halting a series of interest rate increases after financial market turmoil late last year.