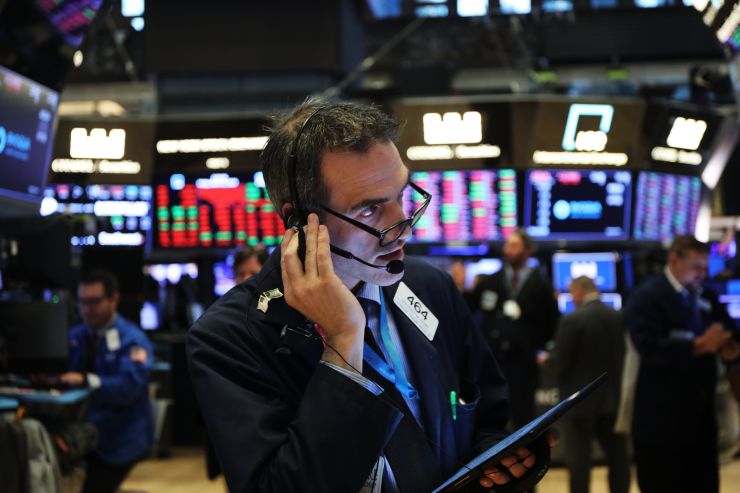 The Dow Jones Industrial Average fell on Monday as Wall Street digested strong gains from the previous week and looked ahead to the start of the corporate earnings season.

“Equity trends remain steadfastly bullish but are now getting stretched, and have arrived at near-term areas where resistance could set in,” said Mark Newton, managing member at Newton Advisors. “Momentum is nearing overbought territory yet again after one of the best quarters in over 20 years time, while the groups that have led this rally, namely technology, consumer discretionary and industrials, are now up to levels near prior highs which are thought to be important from a price perspective.”

Shares of Boeing and General Electric led the decline. Boeing dropped more than 4% after Bank of America Merrill Lynch cut its rating on the aerospace giant to neutral from buy. The bank said it expects production of the 737 Max jet to be delayed by six to nine months. This follows a deadly plane crash from last month that involved a 737 Max plane.

GE, meanwhile, fell more than 5% after J.P. Morgan downgraded the stock, noting: “We believe many investors are underestimating the severity of the challenges and underlying risks at GE, while overestimating the value of small positives.”

Monday’s declines follow a second consecutive week of gains for the three major stock indexes. Trade talk progress between the United States and China and a strong March jobs report both boosted the Dow, S&P 500 and Nasdaq through Friday’s close.

President Donald Trump said Thursday “we’ll know over the next four weeks” whether a deal between the two countries can be reached. On Friday, the Labor Department reported that 196,000 jobs were created in March.

“Investors continued to ride a hot hand last week,” said Craig Johnson, chief market technician at Piper Jaffray, in a note to clients. He added that investor focus will shift to the release of quarterly corporate results as the earnings season kicks off on Friday. J.P. Morgan Chase and Wells Fargo are set to report that day.

Wall Street expects this earnings season to be a tough one. First-quarter S&P 500 earnings are expected to have fallen 4.2% on a year-over-year basis, according to FactSet. That would be the first earnings contraction for the S&P 500 since the second quarter of 2016.

“From our perspective, the market will need beat and raise results in order to justify the premium valuation against the current economic and geopolitical backdrop,” Piper Jaffray’s Johnson said.

On the data front, factory orders for February fell 0.5% amid weakness in the machinery, transportation equipment and electronic products segments. Shipments, however, rose 0.4%. Treasury yields climbed on the data. The 10-year rate rose to around 2.51% while the 30-year yield yield traded at 2.926%.

Snap shares rose more than 3% after RBC Capital Markets upgraded the social media company to outperform from sector perform, noting the “potential for a positive inflection point catalyzing ” the stock.