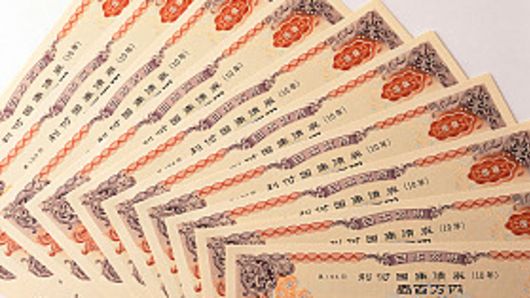 A record amount of money poured into China’s financial markets in 2018 — and analysts say that figure will likely increase as closely followed indexes raise their weightings for Chinese assets.

China’s bond and stock markets experienced inflows of $120 billion last year and that amount could reach $200 billion this year, boosted by the inclusion of Chinese assets in benchmark indexes, according to a report by Citi.

“Inflows from bonds and equities are likely to continue supporting China’s (balance of payments),” the U.S. bank said in its Jan. 31 report.

While financial markets in China remain highly regulated compared to those of advanced economies, the door has been gradually opening and investors are keen to get in as opportunities increase.

Chinese A-shares — or yuan-denominated stocks traded on the mainland — were included in the MSCI Emerging Markets Index for the first time last year, allowing investors to access the Chinese equity market more easily. Now, MSCI is considering whether to further increase the weighting of A-shares in its indexes, and could announce its decision by the end of this month.

While Chinese authorities have kept a lid on what they consider potentially destabilizing capital outflows, they largely welcome inflows, which have increased following various arrangements that allow foreign investors to buy domestic stocks and bonds through Hong Kong.

People will recognize that the trade war will be an “ongoing problem,” Wan said, but he added that he did not expect anything “drastic” to happen.

All that could be good news for a country growing more reliant on foreign money as its economy slows.

Many index funds, mutual funds and exchange-traded funds (ETFs) are directly benchmarked against MSCI indexes such as the Emerging Markets ETF and the iShares MSCI All World ETF.

Many fund managers and investors may have to buy shares that are included in major indexes that include A-shares as their funds and portfolios often track the benchmark, Wan said.

“My expectation is that the capital inflow into (the) Chinese market will be increasing,” he said.

Chinese bonds will now make up 6 percent of that index, from 0 percent before.

“That is massive,” Peng told CNBC on Thursday. “It’s going to go from zero to the No. 4 bond market in the index.”