Goldman Sachs: As long as consumers keep shopping, there’s hope for the economy 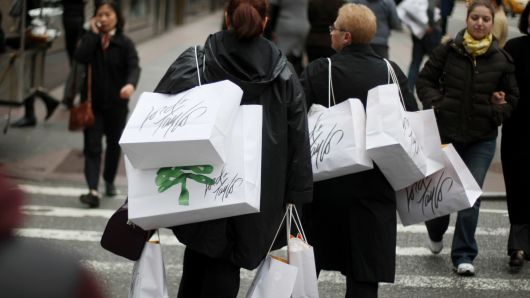 For a market that’s become increasingly jittery over the U.S. economy, Goldman Sachs has a message: All is not lost.

Wall Street’s head-spinning volatility, which last week shaved more than 1,000 points off the Dow Jones Industrial Average, has pushed stocks into correction territory and raised fears for 2019. Although falling stocks and rising interest rates will continue to weigh on sentiment, those negatives are likely to be offset by higher wages and oil prices in retreat, Goldman said in a research note to clients Saturday.

“Three of the key drivers of consumer spending send a positive message for the near-term outlook,” the bank’s analysts wrote.

“First, real disposable income is likely to continue its strong growth due to accelerating wage growth, and recent declines in the oil price are likely to be a significant tailwind to spending in 2019,” Goldman said. November’s jobs data released on Friday showed lower-than-expected payrolls growth but wages growing at the fastest rate in nearly a decade.

“Second, the saving rate looks elevated relative to the high level of household wealth, even after the recent sell-off,” the analysts wrote. And with consumer spending — which comprises 2/3rdof the vast U.S. economy — still strong, “consumer sentiment is likely to stay elevated, reflecting strong underlying economic fundamentals as well as optimism about the labor market and income growth,” the firm said.

Goldman’s relatively upbeat assessment came against a backdrop of a market buffeted by internal and external risks — most notably the U.S.’ ongoing trade war with China. The Dow has erased its gains for the year, while the S&P 500 pulled back 2.3 percent to 2,633.08 and turned negative for the year.

The bank acknowledged that those sharp losses will translate into “some near-term restraint on spending,” as well as consumer lending. Rising interest rates will also dampen the outlook, the bank said, adding that growth will gradually decelerate from 2.8 percent in the first quarter to an average of 2.4-to 2.5 percent over 2019.

In a somber assessment of its own on Friday, Morgan Stanley forecast the market would remain “range bound” in 2019, citing “the elevated risk of an earnings recession. We expect topline growth to decelerate (due to decelerating GDP) and margins to come under pressure.”

With the Federal Reserve and the European Central Bank pulling back on loose money policies, “the good news is that tightening may be coming to a pause/end early next year which could bring relief to global asset prices particularly if China growth stabilizes,” Morgan Stanley’s analysts wrote.

Still, economists point to the sharp drop in crude prices, which recently fell below $50 per barrel, as a boost for consumers.

“The recent declines in the oil price, the high savings rate, and strong consumer sentiment, largely offset the drag from recent stock price declines, tightening lending standards, and higher rates,” according to Goldman.

“The bottom line is that even after recent declines in the equity market, we continue to expect strong but decelerating consumption growth over the next few quarters,” the bank said.