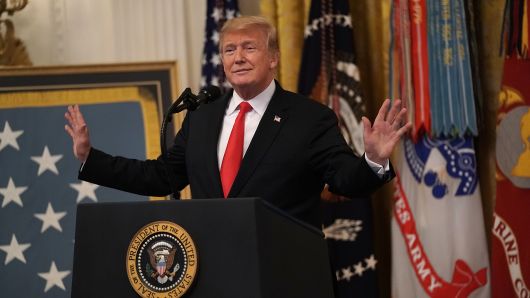 President Donald Trump will impose 10 percent tariffs on $200 billion worth of Chinese imports, and those duties will rise to 25 percent at the end of the year.

The action, announced by the Trump administration Monday, escalates a trade conflict between the world’s two largest economies. China has already threatened to retaliate against new duties.

The White House removed about 300 goods from a previously proposed list of affected products, including smart watches, some chemicals, and other products such as bicycle helmets and high chairs.

Trump, in a statement, said that the tariffs would rise to 25 percent on Jan. 1, 2019, adding that “if China takes retaliatory action against our farmers or other industries, we will immediately pursue phase three, which is tariffs on approximately $267 billion of additional imports.”

Trump has previously said that those additional duties are “ready to go on short notice if I want.”

The action will only ratchet up tensions between Washington and Beijing. The president seeks a new trade agreement amid complaints about alleged theft of intellectual property by Chinese companies and concerns about the U.S. trade deficit with China. The two sides have failed to reach a deal to resolve the White House’s concerns with China’s trade practices despite a series of talks.

“We have been very clear about the type of changes that need to be made, and we have given China every opportunity to treat us more fairly,” Trump said in the statement.

“But, so far, China has been unwilling to change its practices.”

The president has defended his tariff moves, despite mounting criticism from Republican lawmakers and potential political damage. On Monday morning, he tweeted: “Tariffs have put the U.S. in a very strong bargaining position, with Billions of Dollars, and Jobs, flowing into our Country – and yet cost increases have thus far been almost unnoticeable. If countries will not make fair deals with us, they will be ‘Tariffed!'”