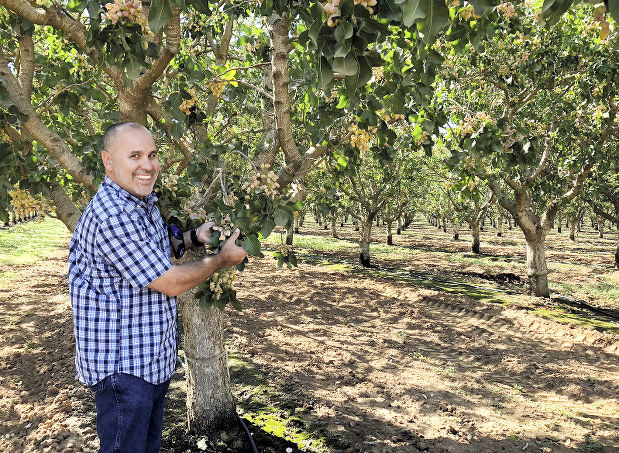 FRESNO, California/BUENOS AIRES, Argentina — About 420,000 pistachio trees loaded with tiny yellow nuts cover a spacious 700-hectare farm in Fresno. It is late August, in the middle of the harvest season. The farm, a former vineyard, has tripled in size and value during the past 10 years — a sign of the attention such operations are attracting from international investors.

“You remember when we had our economic collapse in 2008. Everything was bad. People lost jobs,” said Kirk Sagouspe, 51, a local evaluator of farmland. “But agriculture started to do really well then. So, you had people getting out of the stock market, and … putting their money into agriculture, so (there was) a better return on your investment,” he added with a wide smile.

The money invested in the pistachio farm stems from a massive monetary easing policy implemented after the September 2008 economic shock triggered by the collapse of major investment bank Lehman Brothers — the so-called “Lehman shock.” The pistachio business offered more than 10 percent of its yield at one point, and institutional investors in advanced economies poured money into the farm. “Recently, South Korean, Chinese and Japanese investors are injecting their money,” said an official of a Canadian asset management firm that distributes profits from sale of the nuts and farmland.

With the infusion of easy money, real estate and stock markets were resurrected from the deep freeze they had been in since the Lehman shock. In 2016, the U.S. housing price index rebounded beyond its pre-2008 peak. The Dow Jones Industrial Average stock index also marked a historic high in January this year.

The land price in Tokyo’s posh Ginza district, meanwhile, rose to unprecedented levels for three years in a row from 2016, and this past January, the Nikkei Stock Average hit its highest peak in 26 years.

With such developments, some institutional investors, looking to high-yield investment portfolios rather than low-return government bonds to meet their promises of pension and insurance payments, ended up investing in pistachio farms. However, due to supply increases, appreciation of the price of farmland is slowing. Furthermore, China has slapped a 25 percent tariff on U.S.-made pistachio nuts in retaliation for sanctions leveled by the U.S. administration of President Donald Trump in his trade war.

Devin Aviles, a 51-year-old production manager at the Fresno farm, is worried. “I think what a lot of people are thinking is, it could reduce our exports to China maybe by 50 percent,” he said. Sagouspe agreed. “Unless they can get it worked out, it’s going to have a huge impact on the industry for sure,” he said. He is also concerned about pistachio overproduction, saying with a clouded expression on his face it is possible production is already overheating.

As major monetary easing was implemented to shore up economies in the wake of the Lehman shock, share prices across the world doubled and cash flowed into emerging countries seeking higher yields. Now, the rip currents of funds leaving those economies are dragging people away with them. Argentina is one such place where this has happened.

At a construction work site to elevate railway tracks in a suburb of the capital Buenos Aires, several workers were hanging around without doing anything particular in mid-July. “Railway services are suspended now because of the work, but will resume in a year or so,” said a smiling Damian Godoy, 31. When a Mainichi Shimbun reporter visited the site again in September, still nothing was happening. One man at the site complained that some workers had been fired.

Argentina had a negative reputation among foreign investors because of its failure to pay its debt on time on seven occasions in the past, but it was finally attracting easy money that had been injected into the market by the central banks of advanced nations. In June last year, the Argentine government succeeded in issuing 100-year government bonds for public works projects with a repayment deadline of 2117. Anticipation grew for an influx of money from overseas, and 60 projects jointly conducted by the public and private sectors began this year.

“We have traveled to Europe, to the U.S., to Japan, Korea, China, and we’ve seen a lot of interest,” said Tomas Darmandrail, National Director of Executive Coordination in the Argentine government.

The money flow, however, began to dry up in April this year. The domestic economy including the agricultural sector, which was suffering from a drought, showed signs of stress, and the U.S. Federal Reserve Board began to accelerate interest rate hikes, triggering an exodus of investment funds.

The Argentine central bank raised its benchmark interest rate to a whopping 60 percent but the money drain didn’t stop. The jobless rate went up to 9 percent, 1.9 percentage points higher than the previous year. As the International Monetary Fund demanded that the country speed up the restructuring of its finances in return for receiving support from the IMF, Buenos Aires announced on Sept. 3 that it would halve public investments.

“We have to face a basic problem. We cannot spend more than we have,” Preisdent Mauricio Macri said. “This is not just another crisis. It has to be the last.”

Argentina is not alone. This year Turkey’s currency, the lira, plunged by more than 40 percent against the U.S. dollar. Devaluation of the currency triggered stock market plunges across the world as investors became worried that the cheap lira would affect European financial institutions, which have a lot of debt held by Turkish companies on their books. A massive wave of currency depreciation has hit countries such as Brazil, Indonesia, South Africa and India, and the countries’ respective governments are bent on shoring up their interest rates and taking other measures to defend their currencies.

Why is this happening? Tadashi Nakamae, an international monetary flow specialist and head of think tank Nakamae International Economic Research, pointed out that emerging countries were the first to face the financial crunch after U.S. authorities started to introduce a more stringent monetary policy 2 1/2 years ago. “When the finances of companies such as Apple Inc., which has cashed in on the growth of emerging countries, begin to deteriorate, the stock price bubble in the United States will go bust,” says Nakamae. “We will have to foot the bill for overcoming the post-Lehman economic downturn by creating the next bubble.

China, the second largest economy in the world, is also facing risks from an economic bubble.

“Get our money back. We worked hard to earn it,” yelled several dozen people in red shirts in a central office district of Beijing on Aug. 23, waving national flags and hoisting banners with their slogans. Those people invested in a financial company whose head was arrested in April for allegedly collecting money illegally — and who lost a lot of it.

The arrested man and his company had collected 60 billion yuan (about 1 trillion yen) from individuals and lent it to companies and people via the internet using peer-to-peer technology. Seven hundred or more similar companies were shuttered during the first half of this year alone by Chinese authorities who feared overheating of speculative investments, according to a local media outlet.

In China, the continuing economic growth is creating a huge amount of money and its owners are always looking for good investment opportunities and waste no time in snapping up financial instruments making high profits. Whenever the economy heats up and the bubble grows, regulators begin to launch campaigns to cool down the overheating, and this cycle seems to have no end.

One of the triggers for the current Chinese investment boom is Beijing’s introduction in November 2008 of an economic stimulus package totaling 4 trillion yuan (57 trillion yen at the exchange rate at that time). While advanced countries were struggling in confusion after the Lehman shock, China’s quick response to revitalize the economy was praised world over as a “savior.” People began to possess the illusion that high growth would continue, and plunged into speculative investment in droves.

However, according to Ke Long, a Chinese economy expert and senior fellow at the Tokyo Foundation for Policy Research, the money was spent on infrastructure projects with low yields just to use up the huge budget. “Most of the 4 trillion yuan package was spent on state enterprises, and heavy industry companies producing steel, coal and aluminum made excessive investments,” he explained.

Several years on, this excessive investment has resulted in excessive steel production and a global decline in steel prices, contributing in part to the Trump administration’s introduction of additional tariffs on imported steel products.

In the real estate sector, large-scale housing divisions have been developed even in regional cities with little demand for such structures, and “ghost cities” with hardly any residents have cropped up around the country. The opaque financial flow of monetary sources known as “shadow banking” has also rapidly expanded. Since 2009, the amount of China’s private debt has risen by 20 trillion dollars, or roughly 2,200 trillion yen, making up roughly 60 percent of debt increases worldwide.

The Chinese administration of President Xi Jinping is now highlighting financial risk as the most important issue for the country to address. The government has repeatedly implemented measures to curb practices such as investment in real estate — in which even government authorities have engaged. However, the excessive debt continues to grow, and the International Monetary Fund and other organizations are concerned that China now poses a severe risk to the international economy.

“The terrifying thing about an economic bubble is that no one notices the danger until it collapses,” a top official at a Shanghai-based foreign financial institution said. “China is even more at risk as it has never before experienced such an economic crash.”