Chinese investors are putting their money in a lot of places. That rarely means stocks 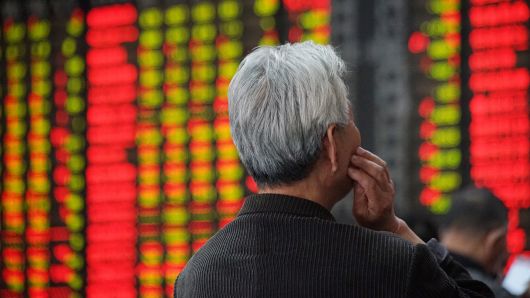 Stocks still rank low on the popularity list for Chinese investors, while private funds are playing a larger role in the country’s asset management market — which many predict will soon become the world’s second largest.

The composition of investing in China looks quite different from that of the U.S. While equities account for a major portion of American portfolios, Chinese investors have preferred real estate to the volatile domestic stock market that is driven more by retail sentiment than long-term institutional holders. And as Chinese investors grow more sophisticated, local financial services are focused more on developing fixed income and private equity products. 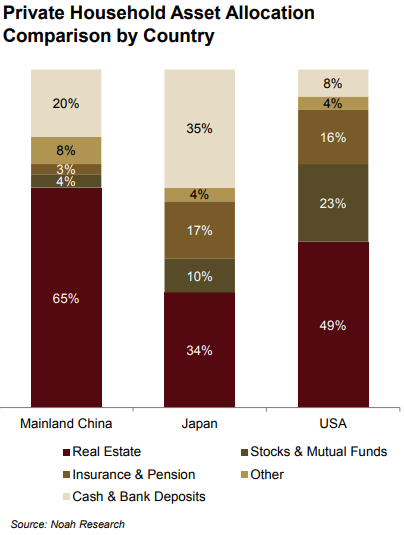 For example, the primary money market fund on Yu’e Bao, a mobile investment service run through Alibaba-affiliate Ant Financial, became the largest such fund in four years. It had more than 470 million users as of the end of 2017, according to Ant, and about 1.45 trillion yuan ($211 billion) in assets as of the end of June, public data showed.

“The next wave, we think, will be into fixed income,” Ott said. He predicted allocation to money market funds will fall to about 50 percent in the next five years, while the proportion of fixed income investment will rise to 20 percent from 15 percent.

China’s wealthiest also prefer other investments to stocks. A leading Chinese wealth manager for high net worth individuals, Noah Holdings, told CNBC that about 60 percent of assets under management are in alternative investments such as private equity and venture capital.

The heavy allocation to private investments makes sense in a country of many fast-growing young companies soon to go public or get acquired.

Last year, through its asset management arm Gopher, Noah said it invested in nearly half of 120 unlisted companies in greater China with valuations of more than $1 billion, according to a first quarter earnings presentation. Those so-called unicorns include Meituan Dianping — which combines features similar to Groupon, Yelp and Seamless and is expected to raise more than $4 billion in a Hong Kong IPO — and video streaming platform iQiyi, which held a $2.3 billion public offering in New York in March.

Chinese high net worth investors are also putting more money into real estate funds than houses, and hedge funds rather than individual stocks, according to Yue Zhang, senior vice president at Credit Ease, another major Chinese wealth manager. More and more of those affluent investors are allocating assets overseas, she added.

At the high end of the market, total investable assets were expected to reach 188 trillion yuan in 2017, up from 165 trillion a year ago, according to the latest report available from Bain.

Western firms such as UBS and Black Rock have also been attracted to the growth opportunity, and a PwC survey of 126 global asset management CEOs found 40 percent of non-Chinese leaders are looking to China this year.

But the future development of the Chinese asset management industry still depends on government regulation. Beijing is trying to encourage more stable investment in the stock market, including from foreigners, and increasing supervision of financial firms overall.

“While private wealth is arguably growing faster there than anywhere else, and the government is taking steps to open up the asset management market, serious obstacles to doing business remain,” the PwC report said. “Indeed, several asset and wealth managers have been disappointed.”