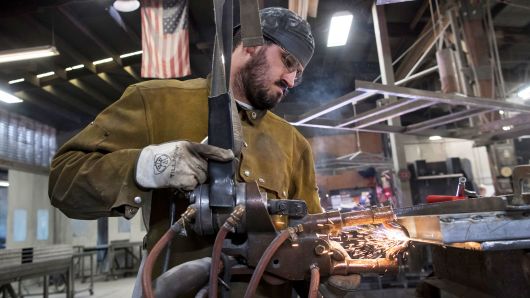 Compensation for workers rose to a nearly 10-year high in the second quarter as inflation pressures continued to percolate in the U.S. economy.

The employment cost index increased 0.6 percent for civilian workers in the three-month period ending in June, according to a Bureau of Labor Statistics release Tuesday. That brought the 12-month rate up to 2.8 percent, the highest level since 2.9 percent in the third quarter of 2008, amid the financial crisis and the Great Recession.

Significant wage gains have been a missing part of the economic recovery, with average hourly earnings increases barely keeping pace with inflation.

However, the ECI has been on a steady rise over the past year and a half. The index had struggled to stay above 2 percent for most of the period following the recession as the Federal Reserve kept interest rates low and inflation stayed well below historical norms. However, the index has been climbing steadily from the 2.2 percent level just prior to President Donald Trump taking office.

“With the labor market tightening, stronger wage pressures should continue to feed through into higher inflation over the rest of this year,” Andrew Hunter, U.S. economist at Capital Economics, said in a note.

Private industry compensation was up 2.9 percent, a substantial rise from the 2.4 percent recorded as of June 2017. Government compensation increased 2.3 percent for the period, which actually was a pullback from the 2.6 percent gain recorded in June 2017.

The release comes ahead of Friday’s closely watched nonfarm payrolls report. Economists expect a gain of about 190,000 and a 2.7 percent increase in average hourly earnings. It also follows last Friday’s robust GDP release, which showed the economy grew 4.1 percent in the second quarter.

Also this week, the Federal Reserve meets to discuss monetary policy. The central bank’s Federal Open Market Committee is expected to keep its benchmark interest rate target at between 1.75 percent and 2 percent, and wait until September for the next increase. However, committee members are believed to watch the employment cost index closely.