US industrial production rose 0.7% in April, vs 0.6% increase expected 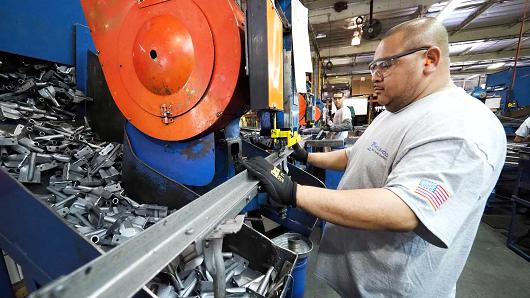 U.S. factory output rose in April, although new estimates of manufacturing and overall industrial production showed less growth in prior months than initially believed, casting a shadow over the economic outlook.

Manufacturing output rose 0.5 percent last month, the U.S. Federal Reserve said on Wednesday in a report on output across the industrial sector, which comprises manufacturing, mining, and electric and gas utilities.

Economists polled by Reuters had forecast a 0.5 percent rise in manufacturing. But the Fed’s new estimates of factory output in prior months showed output was slightly lower than previously believed in each month between November and March.

Overall industrial output expanded 0.7 percent in April and estimates of output in three of the previous four months were also lowered, including a sharply reduced estimate for February.

A 2.3 percent increase in machinery production bolstered the overall gain in factory output, although a drop in production of primary metals and fabricated metal products weighed on the sector.

The report follows a survey of factory managers published earlier this month that showed a slowdown in U.S. factory activity, with manufacturers complaining about rising commodity prices in the wake of the Trump administration’s tariffs on steel and aluminum imports.

A recent Fed report based on comments of the central bank’s business contacts across the country showed rising concern about the tariffs, although Fed Chairman Jerome Powell said last month it was too early to know how they would affect the U.S. economic outlook.

In the 12 months through April overall industrial output rose 3.5 percent.

The percentage of industrial capacity in use rose 0.4 percentage point in April to 78.0 percent.

Fed officials look to capacity use as a signal for how much further the economy can accelerate before sparking higher inflation.