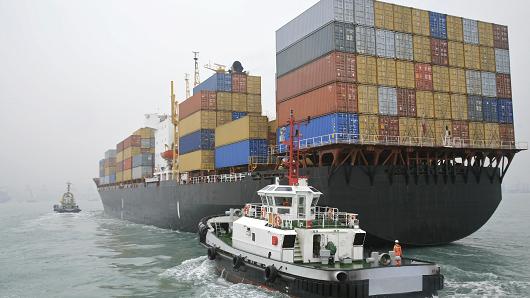 A broad swathe of economists and corporate executives are criticizing the mounting trade spat between the U.S. and China, with many American business leaders fearing damaging retaliation for the tariffs President Donald Trump has been unveiling since March.

To date, both countries have announced hundreds of billions of dollars worth of import tariffs on each other’s goods.

But while the larger part of market experts seem to agree a trade war would be generally bad for the whole world, there are some countries that could indeed benefit from Chinese tariffs on U.S. goods, as it creates potential room for other trade partners to expand their own exports.

“There are definitely economies that can benefit from the trade tariffs,” said Jim Barrineau, head of emerging market debt relative at Schroders. If the dispute becomes a longer lasting trade war, Barrineau said, “China could step up direct investments into agriculture, metals, and energy producers throughout emerging economies to diversify sources of goods away from the U.S.”

A major U.S. export now facing a 25 percent tariff is soybeans. China is the world’s largest importer of the crop, and the U.S. is its second largest supplier. This is set to severely impact both American soybean farmers and Chinese pork producers, who rely on the produce to feed their livestock.

“Brazil may be a prime beneficiary,” Barrineau said, while noting that 75 percent of their soybeans already go to China. “Nevertheless, they could enjoy preferential pricing if U.S. soybeans face a high tariff.”

Paulo Fridman | Bloomberg | Getty Images
Soybeans are loaded onto a truck after being harvested at the Sitio Azulao farm, near Itapetininga, Brazil.

Brazil is already China’s top supplier of soybeans, but it alone won’t be able to fully replace the U.S.’s supply. In 2017, the U.S. sold 32.9 million tons of soybeans to China, second after the 50.93 million tons sold by Brazil.

“(South American) grain handlers will then see the price of their goods increase,” Vogel said. “The farmers should receive a higher price for it, and everyone in the supply chain will get some share of that price.”

Cotton was one of the 106 U.S. exports slated for a 25 percent duty announced by Beijing Wednesday, as part of a package targeting $50 billion worth of U.S. goods annually. China is not a major importer of U.S. cotton, but those businesses seeking an alternative market for cotton to bypass the potential import duties would likely turn to Australia, Vogel said.

Australia’s raw cotton exports come to $1.2 billion a year, and one-third of that currently goes to China, according to the Observatory of Economic Complexity. Vogel didn’t have a projection, however, of how much any import shift could raise prices and increase profitability for Australian cotton producers.

Still, there are downsides, Vogel noted: “Because Australia also imports some soybean meal, they’ll face higher prices there even though they’re benefitting on cotton.”

Still, it will likely only continue to boost demand from Scotland, said Francois Sonneville, director of beverages at RaboResearch Food & Agribusiness.

“If you’re a Chinese person and you like buying American bourbon, like Jack Daniel’s, you might now go for a Scottish whisky because that becomes more attractive,” Sonneville said.

Of course, the tariffs would still hit U.K. and European companies with operations in the U.S. in a number of other sectors — so the benefit of this boost to one sector is unlikely to outweigh costs on other businesses.

Another victim of the tariff battle is American wine, set to also see a 25 percent duty if the threatened measures come into force. China is America’s ninth-largest buyer of wine, according to statistics from Rabobank International, and imported roughly $76 million of the U.S.’s $1.57 billion of total global exports in 2016.

A Chinese buyer might “go for a French or Australian wine rather than a Californian wine because of the tariffs,” Sonneville explained. France and Australia are already China’s top two wine suppliers.

As a result, he said, U.S. wine exporters “will be upset and have to rely more on domestic demand.”

Too soon to say

So would some of these economies benefit from China’s tariffs more than they would be hurt by them?

“It’s a bit too broad to say,” Rabobank’s Vogel said. “We’ll likely see some disadvantages somewhere else, so it’s really hard to say.”

One important thing to consider is how long this will continue, Sonneville said. “Will the U.S. and China resolve issues without loss of face, will this be implemented but slowly reversed or will we see more retaliation on both sides?”