China is at risk of a banking crisis, the Bank of International Settlements has found 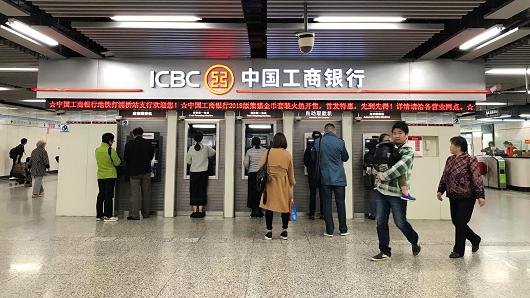 China is one of the economies most at risk of a banking crisis, according to the Bank of International Settlements, which published its quarterly review on Sunday.

The report, which included a study on the early signs of a banking crisis, found China’s debt — measured by a credit-to-GDP gap — surpassing an amount that could lead to a system fallout. The country also has a high level of debt servicing ratio, which made its banking system more vulnerable.

The credit-to-GDP gap measures the difference between the percentage of debt in an economy and its long term trend. A bigger number suggests debt is growing at a pace that may not be healthy for the economy.

Debt servicing ratio, meanwhile, refers to the amount of money as a proportion of income that’s used to repay loans. A higher ratio means borrowers may have taken on too much debt than what their income can support.

In addition to China, the BIS report also found Canada and Hong Kongto be at risk of a banking crisis. The vulnerabilities of those two economies were partly caused by climbing property prices.

The People’s Bank of China, the Bank of Canada and the Hong Kong Monetary Authority did not immediately respond to CNBC’s request for comment.

Despite signs pointing to the banking systems in those three economies being distressed, the BIS said that doesn’t mean China, Canada and Hong Kong are definitely heading into a crisis.

“(The indicators) have been calibrated based on past experience, and cannot take account of broader institutional and economic changes that have taken place since previous crises,” said the BIS, an umbrella body of central banks around the world.

“For example, the much more active use of macroprudential measures should have strengthened the resilience of the financial system to a financial bust, even if it may not have prevented the build-up of the usual signs of vulnerabilities,” the Switzerland-based organization said.

Not the first warning about China

The BIS is not the first international body to flag risks in China.

The International Monetary Fund, in a report published in December, identified three “major tensions” in China’s financial system that could derail the world’s second-largest economy.

But Chinese authorities had acknowledged those risks and taken action to slow down debt accumulation even before the IMF report was released. China accelerated those efforts in 2017 by strengthening regulatory oversight and closed several loopholes in the economy.

Major steps taken include the setting up of a “super financial regulator”to coordinate the oversight of the banking, securities and insurance sectors. The Chinese government has also proposed prohibiting issuers of wealth management products from offering implicit guarantees to investors.